A new year of EPP

The January meeting of English paper piecing addiction hardly got off the ground because of icy weather and flooding in the quilt shop. For February people were really raring to go. It was an excited crowd and they were lots and lots of show and tells. Marlene Sowatzke brought two projects: the first one is tiny nine patches above, not English paper pieced.  Below, Marlene is showing her Just Takes Two quilt by Sue Daley.   It's getting closer to completion every month. 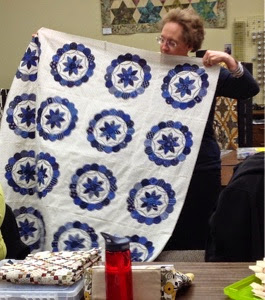 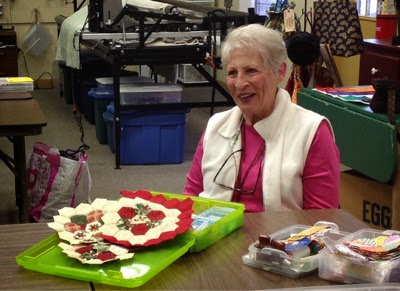 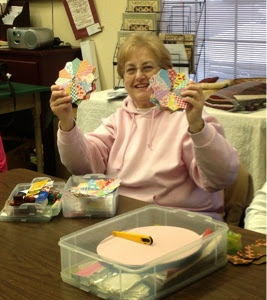 Donna Spain has been working on Sue Daley's Chelsea quilt in beautiful 1930s fabrics and her Dresdens are about done. Jerry Pitts is fussy cutting a project and it's still a work in progress. 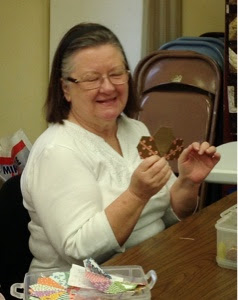 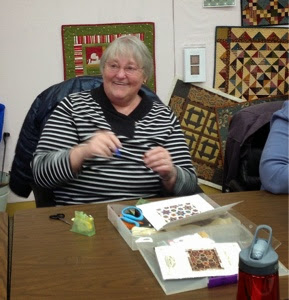 Bonnie Harlow has fallen in love with Stars in the Garden from our friends at Yellow Creek Designs.  She has everything really organized in her box and can work on it at a moments notice 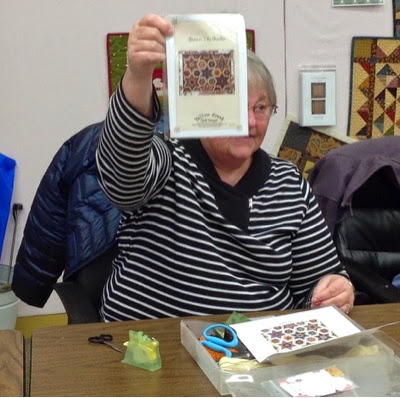 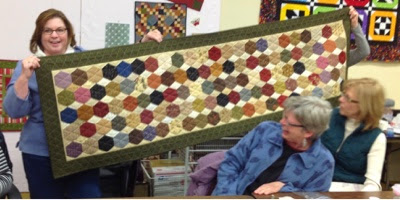 Donna Nigh has completed her king size bed runner from Vicky Bellino's book English Paper Piecing.  She wondered sometimes if she would get it done but it was certainly worth the effort. 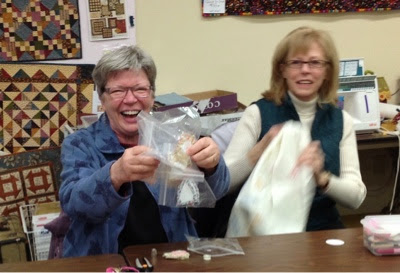 Becky Wilson and Sandy Warren are both working on the same project from Sue Daley, called Faith, Hope, and Love. Becky's is mostly bagged and ready to be sewn together but Sandy has made a lot of progress on her quilt. 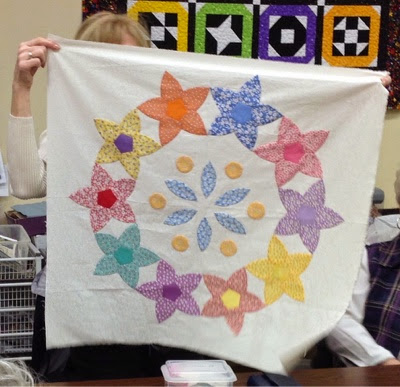 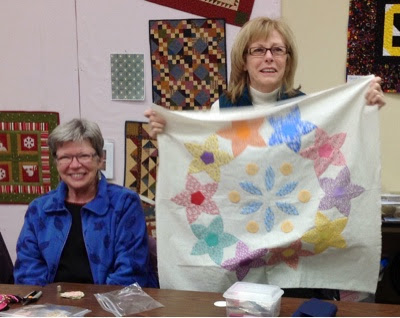 Barbara Rettig enjoys English paper piecing, but her first love is wool embroidery.  She often shows us her wool projects, but she is also working on It Takes Two from Sue Daley, and she showed us the colors that she's using. 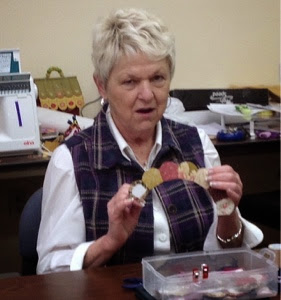 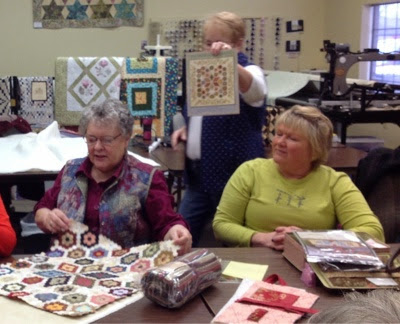 Connie Wass watches as Lynette Reynolds shows her English paper pieced star and hexies.  This is the center of the cover quilt from Handfuls of Scraps but Edyta Sitar. The original quilt was done was seven eighths inch hexagons, but Lynette use three eighths for the miniature look she loves so much. 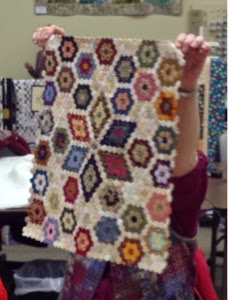 Sharon Howell is working on her Lucy Boston quilt. She has fussy cut the honeycombs to make beautiful blocks.  Carol Federspill has joined our Just like a Jigsaw Club by Sue Daley and is working on the blocks every month.  She's doing a good job of keeping up! 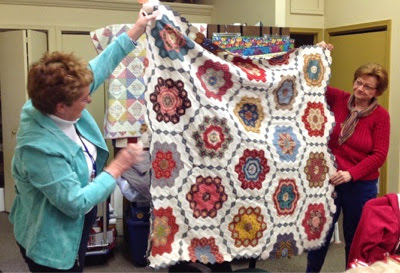 LuAnn Krug brought her quilt back from Di Ford so the new members could see it.  It features hexagons and diamonds. She also has a whole bag full of her diamond stars from Fussy Cut Fridays! 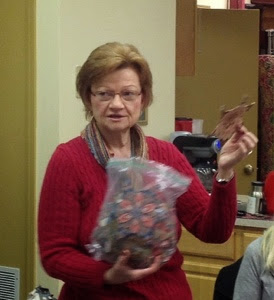 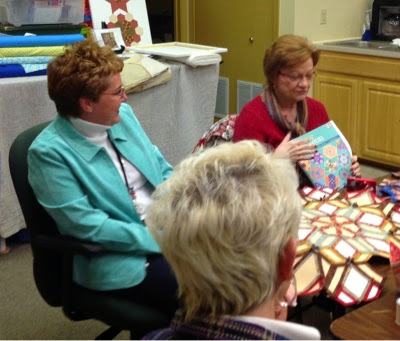 LuAnn and Michele Hellmann are both working on the Millifiori Quilt Along on Facebook, based on the book, The New Hexagon by Katja Marek. There's a picture of Linda and Teri with Katja at Quilt Market last fall. 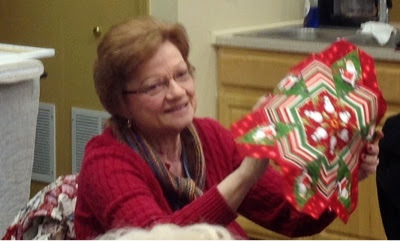 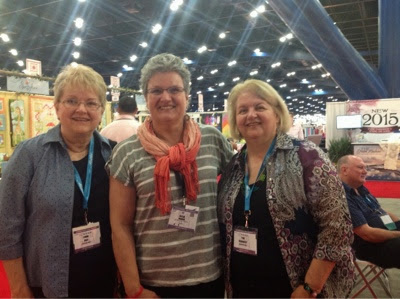 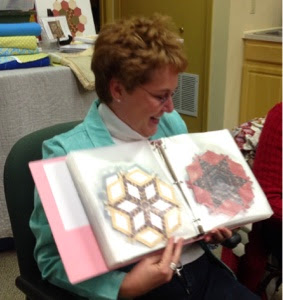 Michele is super organized and has all her Fussy Cut Friday stars in a notebook. She is also very prolific as she has gotten the quilt below pieced with English paper piecing and quilted.  Here's her version of her millefiori quilt along so far. 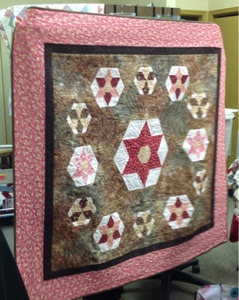 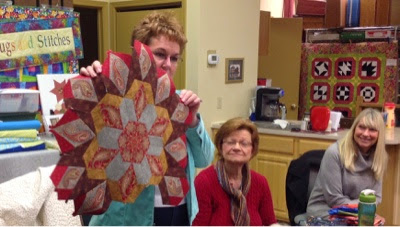 Linda and Teri have been working very hard to get their Chelsea quilt from Sue Daley completed. All they have to do now is scallop the border with bias binding and add the yo-yos to the centers of the Dresdens.  Linda also showed her Pies and Tarts quilt from Sue Daley.  It's growing! 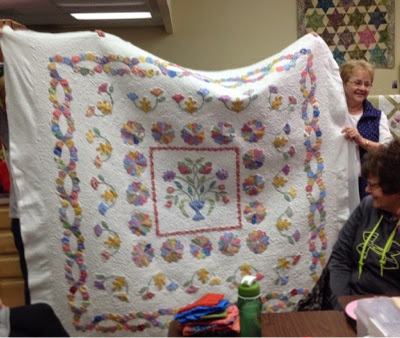 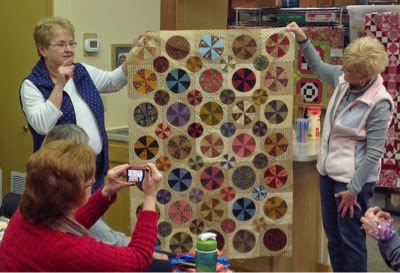 Teri
Linda and I own The Back Door quilt shop, which Linda started almost 43 years ago. We have wonderful co-workers, and customers who are almost like family. We are very thankful for Back Door Quilts!