Tuffets!  They're all the rage, and we are having a great time with them at Back Door Quilts. Linda taught our first class in early December, and the results were terrific! 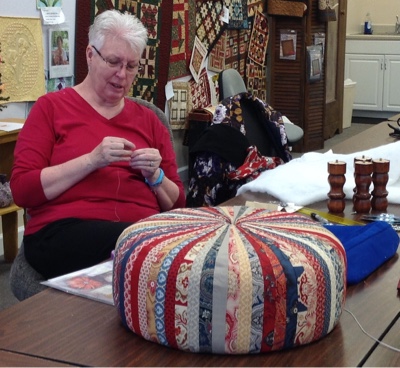 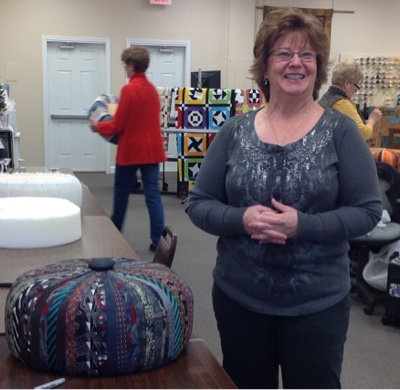 Eileen used ties for her tuffet.  They look sharp and make a great piece of art furniture. 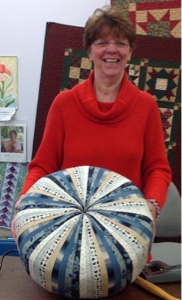 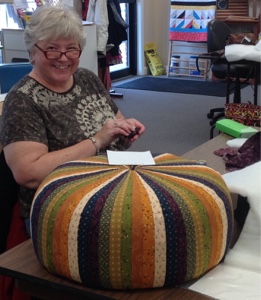 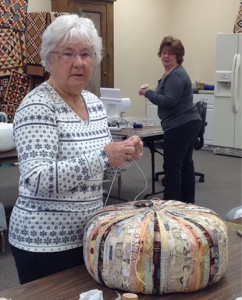 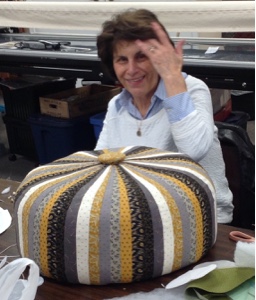 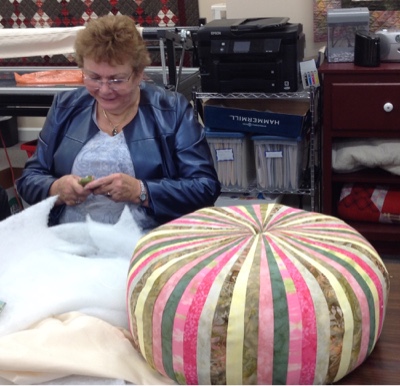 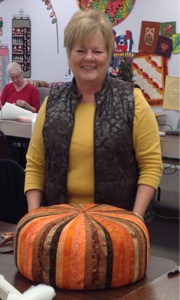 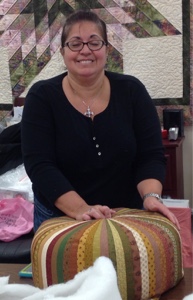 You can use jelly rolls for lots of coordinated variety.  You can also use four of our Pirouette packs, or cut 2" strips from your stash. As you can see, there's a lot of options!

Here is Linda's first Tuffet. She used the pattern, Pieced 18" Tuffet from Tuffet Source.  Some exciting news: Linda will be attending the Tuffet a Source Affiliate Workshop in mid March and will be a Certified Tuffet Instructor when she returns!  Our next class is right after her training, Saturday, March 19 from 10-1. 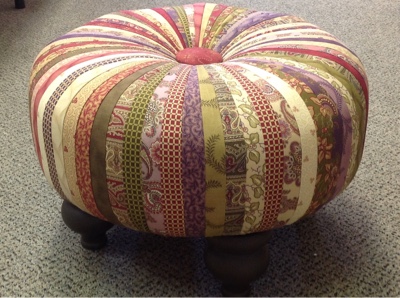 Darlene was inspired to make this beautiful tuffet. 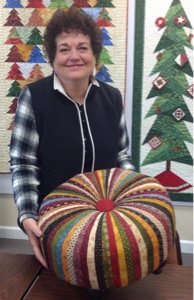 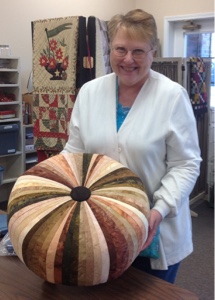 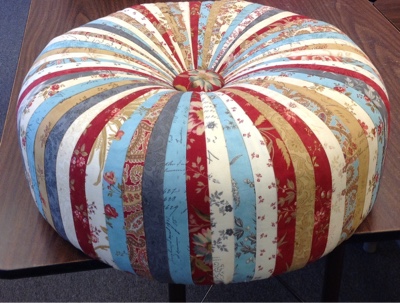 Connie loves reproduction prints, and this tuffet reflects her taste. 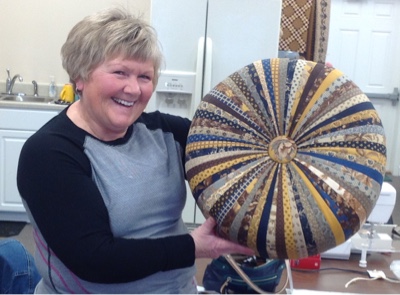 Elaine was so excited to get her tuffet done. 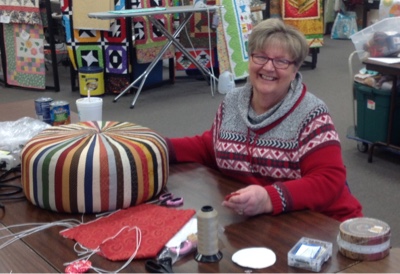 Lynette watches as Connie works on the button cover. 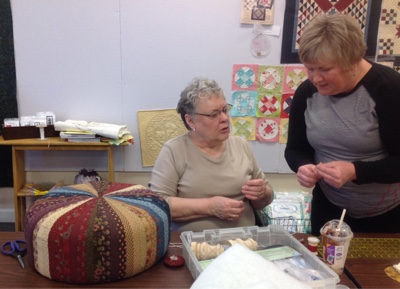 Nyra is a new sewist, and she did just great with her tuffet. Doesn't the shaded jelly roll look yummy? 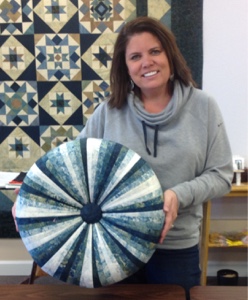 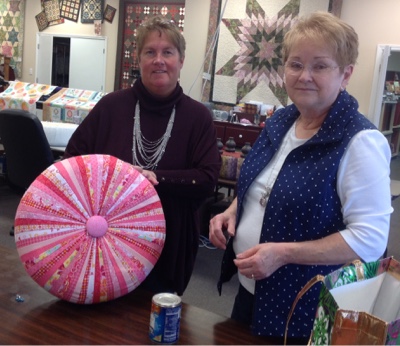 For more inspiration, check out our Tuffet board on Pinterest. Go to www.backdoorquilts.com and press the P button. You can also see lots of beautiful tuffets on Facebook at Tuffet Source and Tuffet Team.  There are so many possibilities!
Posted by Teri at 6:28 PM No comments: 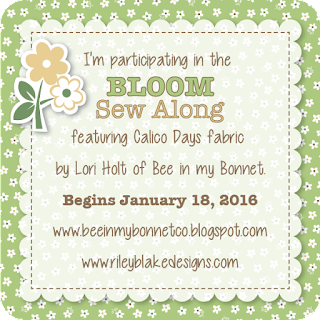 Linda and Teri were so excited about Lori Holt's new Sew Along that we got started ahead of time and have our quilt almost done!  Lori's Sew Along starts today, and you can get your kits from us and sew a block a week from now until June 6. 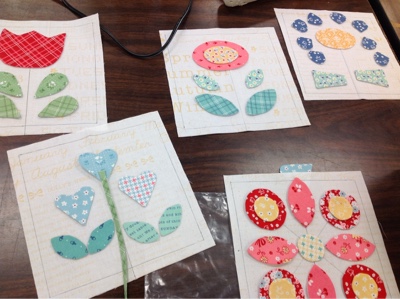 Linda used Lori's technique for applique, which involves featherweight interfacing, and she treated herself to a new pair of pinking shears to trim the rounded pieces.  This makes the curves smoother.  Linda machine stitched the pieces with a buttonhole stitch and cream thread on the top and bottom. She used Sew Fine from Superior, which is a very fine polyester. 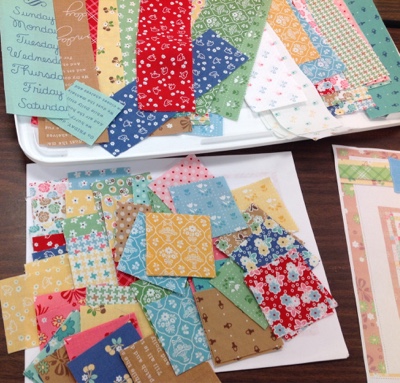 As the blocks were appliqued, Teri trimmed them and added the block borders.  The strips are laid out by design, and the long strips are on a different tray from the corner squares.  It made it easy for Teri to find the right fabrics to add to each block.  She kept her iPad handy so she could enlarge the picture and determine the correct fabric! 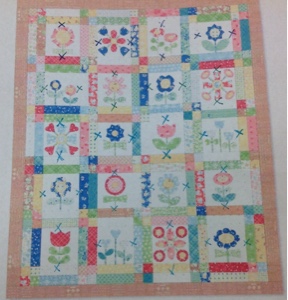 One thing that Teri did differently was add the top and bottom border first on alternate blocks, then the side borders first on the other blocks.  Because she pressed toward the borders instead of pressing open, it made the seams nest together better.  She marked the borders to be sewn on first on a copy of the picture to stay organized. 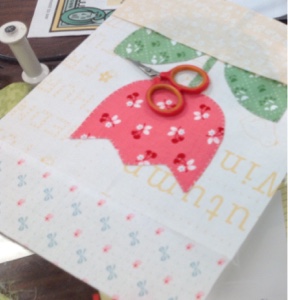 Here's one the blocks with the first borders being added. 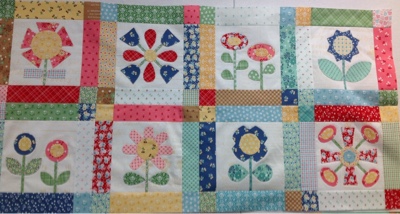 The top two rows are completed. 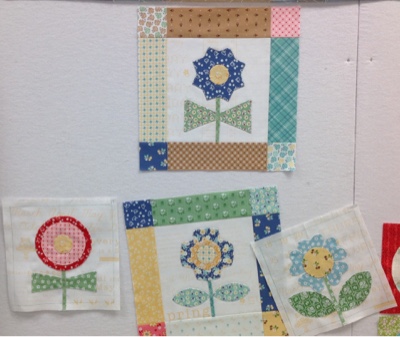 And the rest of the blocks are in various stages of progress.  If you get a chance, be sure to check out the rest of Lori's blog.  She has so many cute gift and decorating ideas.  We're already looking forward to her Cozy Christmas collection, arriving in May.

Teri
Linda and I own The Back Door quilt shop, which Linda started almost 43 years ago. We have wonderful co-workers, and customers who are almost like family. We are very thankful for Back Door Quilts!